I apologize most heartily for my relative absence- we’re wrapping up the field season here in Exmouth, with all that entails: extra snuck-in snorkel trips, boat cleaning, taking posters and papers off of the walls, last-minute photo-ops on the water, cooking strange combinations of things from the remnants of our kitchen cabinets… It’s been a bit of a whirlwind. But still fun, of course.

As a metaphor for my lack of posting, here are a series of photos of giant clams.

The color in the mantle (the soft part, showing from inside the two shells) comes from algae that the mollusk can cultivate within its own tissue. The algae and the clam’s own filter feeding both provide it with food/energy.

Giant clams like these can live up to 100 years in the wild, building up layers of thickening shells as they go. 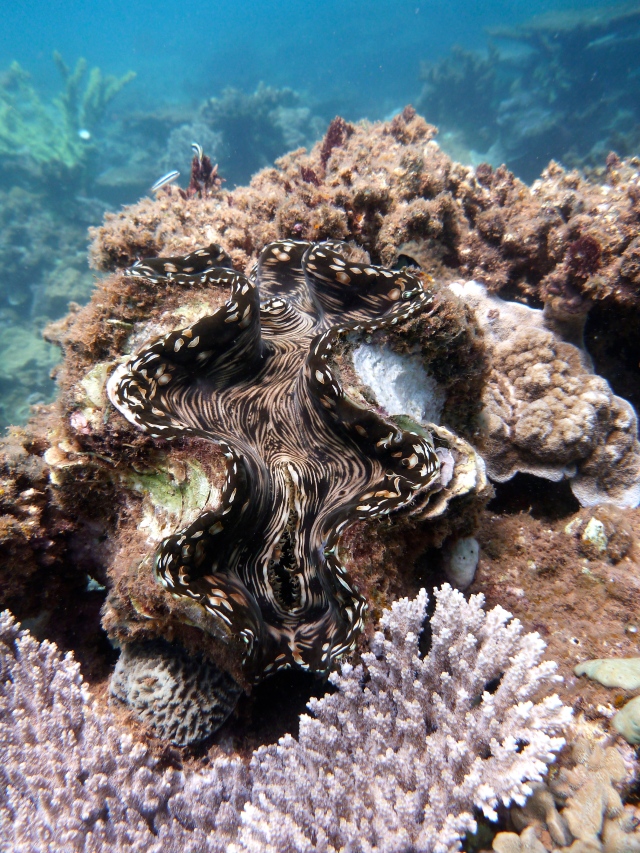 Just so that nobody emails me with warnings that these animals should be added to my list of Things-In-Australia-That-Want-To-Kill-Me (Wikipedia: “It was known in times past as the killer clam or man-eating clam, and reputable scientific and technical manuals once claimed that the great mollusc had caused deaths; versions of the U.S. Navy Diving Manual even gave detailed instructions for releasing oneself from its grasp by severing the adductor muscles used to close its shell.”) I’m pretty sure that I’d have to be trying to climb inside of one of them for it to even give me a good pinch. Most can’t even close their shells the whole way, nor would they have any desire to hang on to a snorkeler/diver. They’re about as dangerous as rotting logs. But much prettier.

Today was Tim’s birthday- we had a gathering last night, a communal meal with some of the best hummus I’ve ever had (thanks Cindy!), beetroot on burgers, happy and then sleepy baby, and a birthday present from the whole of Team Sousa 2014. Kaja emailed every member, present and departed from Exmouth, and added his or her photo to a collage- we took ours on the boat without Tim noticing a thing. Well, okay, he got vaguely suspicious that we were up to something after a while, but forgot soon enough and never saw the signs we’d prepared. Janine, Tim’s wife, and David, his father, took care of printing and laminating, and we surprised him after dinner. Here’s the final collage:

This morning we baked cupcakes and headed for the Cape Range National Park, driving out across more miles (kilometers, sorry) of shrubs and termite mounds and red soil. It’s still fairly green after the rainy season, but the hills are beginning to brown and animals are on the lookout for water.

At Oyster Stacks, a well-known snorkel spot, we suited up and jumped in. I’ve never seen plate corals and healthy staghorn and elkhorn formations like those, nor such a diversity of fishes. The Caribbean, or more specifically the Cayman Islands, which were my last dive destination, has lost nearly all of its staghorn corals and much of its coral health due to human activity and development in the area. In Hawaii, where I’ve done most of my diving, the coral and fish populations are impoverished due to the extreme distance between the islands and any other major coral reef masses. The corals that made it out across the Pacific to those newly-formed volcanoes in the sea were rare and mostly boulder-type structures, growing in bulbous mounds across the seafloor and creating nooks and crannies for the fish that made the crossing too. The number of species in the Hawaiian Islands is therefore much lower than those supported by the Great Barrier Reef and the chains of islands and barrier reefs connecting the whole of the South Pacific. That’s not to say it isn’t a lovely place, plenty of color and interesting fauna, and I’ve loved every minute of every dive there, but the reef architecture of Ningaloo is fascinating.

Purple boulder corals mixed with giant orange plates, surrounded by interlocking horns of bright green polyps, all filled with darting crowds of blue and yellow and red fishes. Big coral heads, nearing the surface of the water or even breaking through it, are referred to here as “bommies,” etymology still unclear. It’s a useful term, though, as we’re often sampling around or in shallow coral communities and need to be watching out lest our propeller should take issue and start a fight with one of the more prominent examples of the phenomenon.

Giant clams nestle in on the reef, showing striped colored mantles. They flinch away from shadows but seem so impenetrably large. I don’t know why they don’t live in the Hawaiian chain- possibly temperature, nutrients, or similar reef structural issues, though distance is likely not the issue. Small clams and other bivalves (two-shelled mollusks like scallops, mussels, and oysters) float as plankton on ocean currents until they grow large enough to settle onto the substrate and develop fully, so a giant clam larva could probably span the ocean to the islands if no other factors impeded its spread.

Anyways, I’ve never seen them before and they’re gorgeous. Their thick-walled shells are impressive on their own, and the exposed inner surfaces ripple with blues and greens created by symbiotic communities of algae that provide the clams with solar energy in the form of sugars while taking shelter in its skin.

Kaja, talented marine photographer of all of this post’s photos, nearly backed into this black-tip reef shark when it rounded a bommie at her back. About 5 feet long and intriguingly deep-chested (possibly pregnant? Later in the season I hope to visit the blacktip nursery out by the mangroves), it is easily identifiable by a layer of black over a mostly-white fin on a gray body. It didn’t seem at all perturbed to see us, nor did it have to work hard at all to outdistance us over the reef when it decided it had had a good enough look.

I’m so glad to have finally made it into the water. We stayed out until we got cold and tired of getting tossed around in the shallow surf, but I’m confident that we’ll have plenty more opportunity to explore. There’s so much to see, and so many questions to ask and answer out on the reef! #SCIENCE