My uncle Tom told me a story in the comments of one of my latest blog posts about his friend, who had told him that if trapped in an enclosure with a large flightless and angry bird (either an emu OR an ostrich), the best strategy was to lie flat on the ground. The birds (either an emu OR an ostrich) are dangerous to vertical people, with their strong legs and sharp toes that are capable of severely injuring a predator or, presumably, a zookeeper. However, their legs (those of either an emu OR an ostrich) aren’t built for kicking things low to the ground, since they wouldn’t usually pose a threat to large, flightless, angry birds. We all wondered in a sort of musing and joking way which of the big birds it was.

That was then. Today I wondered with much more urgency.

This photo was taken with my sister’s prized 50mm lens, lovely for portraits and landscapes alike and remarkably convenient and light to carry. It doesn’t have zoom, so if you wanted to you could probably calculate how close this emu was to the camera and, incidentally, to me. It kept advancing, head slowly moving from left to right as it eyed me and the camera pressed to my face. I kept shooting while walking backwards, but gave up after this shot because 1. I was about to trip over a curb (kerb, in this country) and 2. I was too busy wondering if I needed to lie down (was it an emu? Or was it an ostrich?) and wondering why it had never occurred to whomever came up with that particular strategy that emus have some very business-like beaks that clearly can reach the ground and presumably whatever the emu decided to stand on. Which would hopefully not be my body, my new camera, or my sister’s lens.

I decided not to test this strategy, in part because it seemed risky and in part because I was in the middle of suburban Exmouth, surrounded by trailered boats and little fenced gardens, and it would have been embarrassing. Fun fact: emus don’t really like it if you raise your arms and sort of yodel at them in a kind of panicked sort of way. (I do not know if this tactic works on ostriches.) This one shook its tiny wings and its fluffy rump, stopped advancing, cocked its head in confusion, and decided that I was uninteresting or not worth the intimidation. I felt a bit silly about this, and even sillier when a woman walked out her front door and started throwing breadcrumbs to the emus, greeting me with a cheery “G’day!” before asking, with some concern, if I was okay. 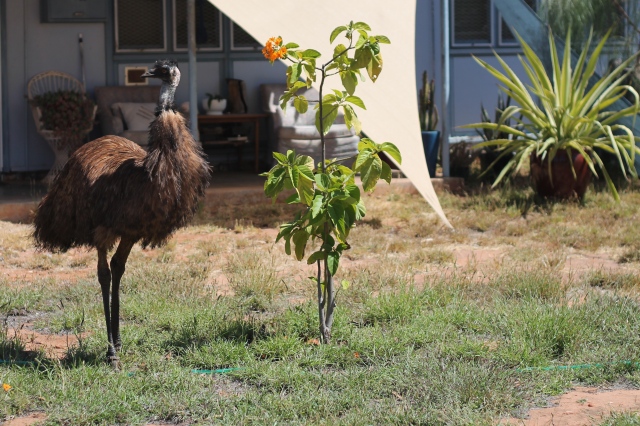 2 comments on “Take It Lying Down”