Despite all the photos of us smiling and drinking tea on boats, looking at the pretty little dolphins and later playing with baby kangaroos, we are actually here in Exmouth for Scientific Research (note the Important Capitals denoting the Realness of our Science).

Anyways, the research bit is cool too. Out on the boat, we drive transects around the tip of the North West Cape, collecting data on dolphin species, numbers, age classes and groupings, locations, environmental conditions, and the ever-important photographs for identifying individual dolphins from the catalogue Tim’s assembled over the past two years.

We aim for good-quality, zoomed-in, in-focus, and well-lit photographs where the fin is parallel to the plane of focus on the camera and fully out of the water, for maximum potential to identify them. Glare, spray, waves, animal movements, boat lurches, poorly angled light or backlight, focus problems- any of these things and many more can disrupt the camera and leave us with a big pile of crappy photos that we later have to sort through. But occasionally we get a photo like this:

It’s clear and sharp, all four fins are fully out of the water, the lighting and contrast are good, and the dolphins are nearly exactly at a right angle to the direction of the lens. As a bonus, the two farthest dolphins are surfacing “in position,” meaning that their positioning along with the relative small size of the middle dolphin indicates that they are possibly a mother-juvenile pair (or in boat slang, MJ). From this photo, then, we can identify probably three out of four dolphins in the catalogue, note that the group cohesion is less than 2 meters, observe their traveling behavior, determine likely relationships, and enjoy lovely memories of how blissfully flat the water was that day.

When processing this photo, we first zoom in. Most of our photos (not sure about this one in particular) are shot with the lens fully extended to 400mm. We then have to crop out most of the photo, anything that is just water or unidentifiable parts like flukes or pectoral fins. This photo, since it’s got four good fins in it, will be copied into up to five different files, one for each dolphin and one to demonstrate the MJ pair’s positioning and relationship in the water and in the group.

The small fin in the middle (a PJ, or potential juvenile) looks fairly unmarked. The edges are smooth, and though there is some spray obscuring a tiny part of the fin, there don’t seem to be any scars that would last from sighting to sighting and allow us to match this dolphin with photos from another time and place. Dolphins heal absurdly fast and absurdly well, sustaining shark attack wounds and other injuries that would seem fatal to a human while continuing to swim around the friggin’ ocean. And their scars often go away really fast, so they can’t regularly be used to tell one fin from another. Therefore, we go mainly on nicks and notches, the unique shapes and textures of a dolphin’s fin. For example: 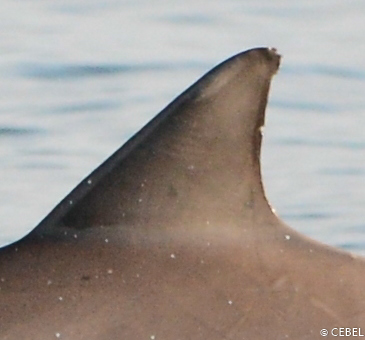 In this way-zoomed-in photo, you can see a notch about the middle of the fin, another toward the top, plus two at the tip. By searching the catalogue for a fin with exactly this shape (fairly distinctive, though not nearly the most distinctive fin I’ve seen) we can determine who’s who with relative ease, especially once we get to know the different fins throughout the season. These ones are Tursiops aduncus, Indo-Pacific bottlenose dolphins, not the main study species Sousa sahulensis, and there are more than 250 recognizable individuals in the catalogue, so we probably won’t know all of these really quickly. But there are a few, like “Steps,” that we can recognize immediately. 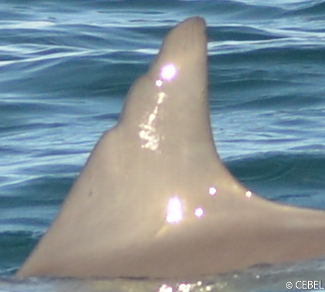 Her scarring is even more distinctive from the other side, and we’ve spotted her a fair number of times since I’ve been in Exmouth. That’s part of the benefit of photo-ID though- we recognize her every time we see her and her juvenile, but just because the other dolphins in her ever-changing group aren’t as obvious, they can still be recorded and identified at a later and more leisurely (sort of…) time.

So there it is- the first part of the Science! All the analysis and breakdowns of data will come later, as we get even more sightings and process the backlog of photos from past boat days. As a reward for reading all that and hopefully understanding a bit more about why all that foolin’ around on boats and such is important to this study, for you my dear readers I present a really freaking cute photo of a baby bottlenose: 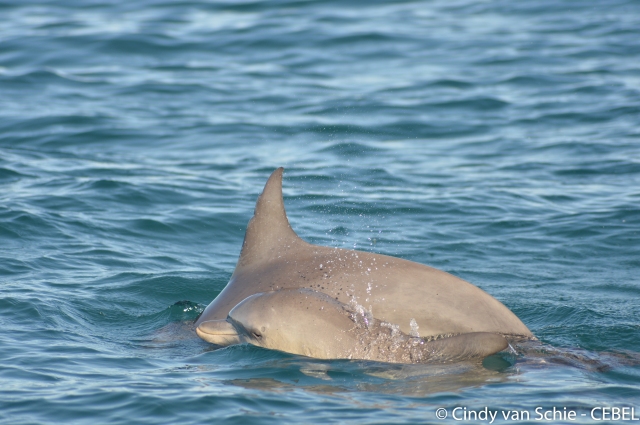