Although Tim laughs at my blogging efforts, I’m sure he’d appreciate this bit of Australiana (that may be a real thing or I may have just made it up… unclear): this evening before we ate dinner, Cindy, Karl, Kaja, and I “went walkabout.”

Walkabout consists of basically wandering with no destination in mind. Of course, I was on my everlasting quest-for-kangaroos (or just ‘roos, if I’m really going Aussie and ignoring my everlasting love of alliteration), but for the most part we just went for a twilight wander. Equipped with cameras and accumulating much red dust on our feet, we examined kangaroo poop, flipped over rocks in search of that poisonous stuff you all keep telling me not to touch, and ambled across the bush in no particular hurry. We felt very authentic, though as a group of people from, respectively, the Netherlands, Poland, and the United States we considered pretending not to understand English should we be stopped by anyone official-looking.

It’s still so pretty out there. I think these are my favorite flowers so far:

But I can’t forget my new acquaintance, the Sturt Desert Pea (Swainsona formosa). If memory serves, Tim said these are the representative flower of Southern Australia and aren’t too common: 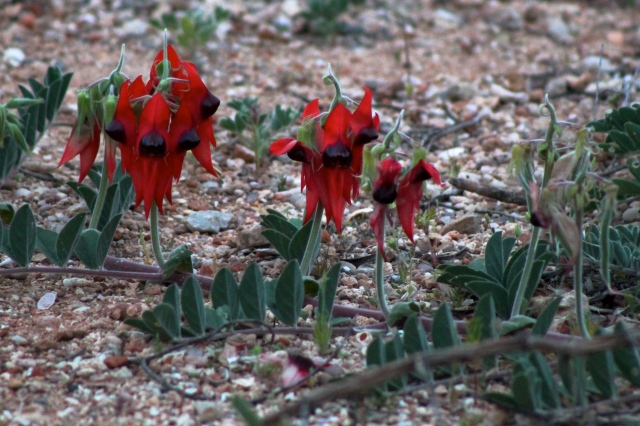 I like to give the impression that all of my days are spent in glorious exploration and comfort and a state of unhurried excitement, but to be honest most of today was very tedious. We’ve got one hell of a procedure in terms of cataloguing and sorting and eventually matching dolphin fins in pursuit of tiny data points that hopefully will end up being relevant again someday, and in the process it feels like interminable button-pushing and repetitive typing and generally squinting at a computer screen wishing you could just blow up computers in general and go back to film and physical folders. When we’re “grounded,” like today, as the boat was in for service and the wind was high (seas ranked at Beaufort 4 or higher… on the same scale, 0-3 encompass glass-smooth to scattered whitecaps), we spend eight hours, 9-5, on renaming and copying and cropping and describing and drawing photos. It’s just a necessary part of the work we’re doing, and while it’s significantly less fun than being on the boat, it has to be done in the pursuit of knowledge and understanding.

Anyways, it ought to be clear why I might want to spend less time talking about that stuff than about the neat spiders I saw or the sand dunes we ran around on, which take up far less of my time than this blog might otherwise imply. This isn’t a fairytale, and it isn’t a vacation, but it is an adventure that brings with it both tedium and excitement. The purpose of this blog, much like the eventual purpose of the scientific papers that will be produced from this study, is not to catalogue every moment of the in-between. It’s to find some nuggets of truth and beauty in the world we inhabit and share those with a wider world than just ourselves.

That’s what makes going walkabout special- the magic comes so easy as the sun goes down and the red dirt settles in the cooling air. We can forget any stiff necks and tired eyes in the dimming light and wander without direction, in the company of new friends and the cradle of an unfamiliar place.