Most of the whales I saw in Haro Strait this summer were members of the Southern Resident population, fish-eaters that travel in large, social, noisy groups.

One morning was different: we awoke to a thick fog, as usual, but the hydrophones in the main room of the Center for Whale research were silent. Whales were passing, but in complete silence and in groups of three and four, jogging along close to the rocky shore with deadly purpose.

Even I, new to the ways of the whales of the Pacific northwest, could feel a visceral difference between this group and the playful bunch I’d seen porpoising by in the days prior. These animals, over twenty feet in length, dorsal fins slicing the surface of the water, were apex predators… and they were on the hunt.

Transients eat marine mammals like seals and porpoises, for the most part, but have been known to take down prey as large and diverse as moose, swimming the channels between the islands, and gray and minke whales, many times the size of the transients but vulnerable to their speed and dogged pursuance. They’ve never been known to take a human in the wild- any accounts of “killer” killer whales are invariably from aquariums- but there’s something in the way they move that pricks an evolutionary nerve. You can tell- you’d be digestible.

Right off the porch, I’d been watching a harbor seal for days. He and another, smaller female had been resident on the rocky reef a few hundred feet from shore, spending afternoons lazing on the old volcanic rock, then disappearing at high tide along with the reef itself. As three sharp fins neared the place I knew the rocks to be, they split suddenly around it. A quick splash of water and the sudden appearance of diving gulls were the only obvious signs that we probably wouldn’t be seeing that seal any longer…

Later that day we got much closer to the scene of the carnage- out on the boat, we found a few groups of transients still hunting. They must be masters of maneuvering underwater. I was almost certain they would hit the rocks, they got so close. 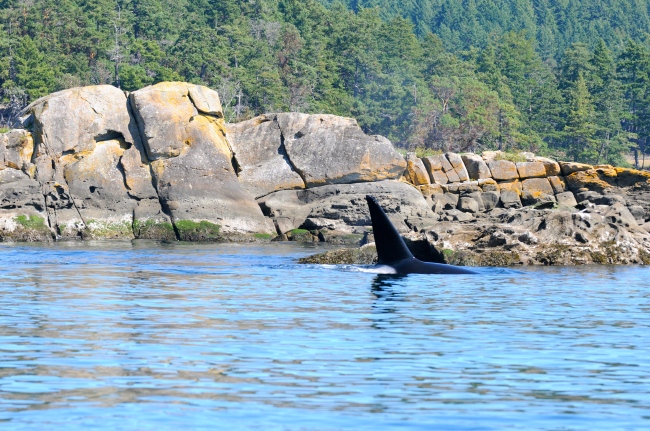 We were rooting for this girl to get away:

She was smart and stayed up on the rocks. Lucky this time…