A few months ago, (sorry, I got busy!) my Marine Biology class went on a field trip from Dartmouth to Woods Hole Oceanographic Institute, along with the surrounding marine labs, aquarium, and ocean! We left school at 6 am and got to the docks around 11, at which point we promptly jumped aboard what looked like the fishing boat out of every kid’s picture book. Decked out with chains and fishing lines and nets and otter trawls and those quaint-looking and questionably effective life preservers, the Gemma was in fact one of the boats that picks up experimental organisms for the researchers at Woods Hole. 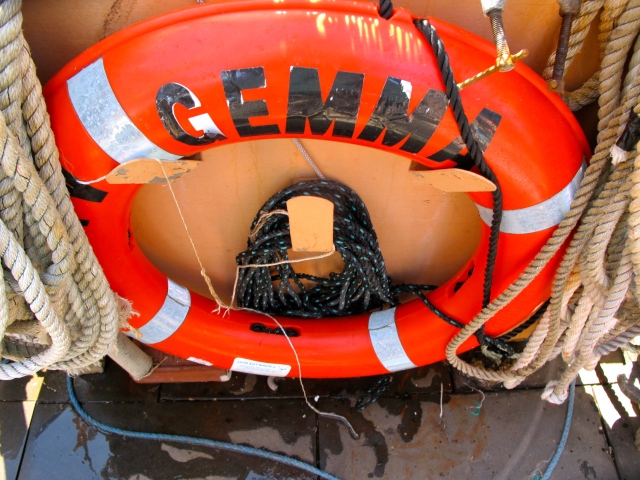 We set out on the Gemma with our “tour guide” (the marine resources provider, aka creature-catcher for the Woods Hole institutions), his son, a BIG friendly german shepherd, and a somewhat less-talkative captain and first mate. It was a beautiful day- chilly, with winter not yet out the door but summer not far away. The water was still cold but the first of the spring fishes had been spotted at the southern end of Cape Cod, and our plankton trawl turned up all manner of life, plant and animal and the things that blur the lines in between, all gearing up for the productive days ahead. 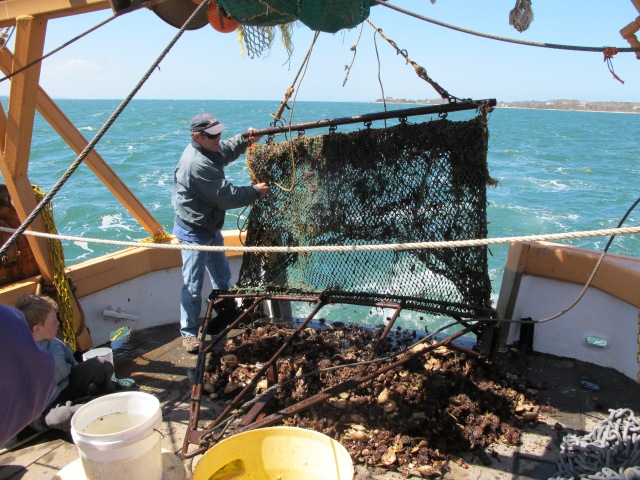 This was the real treasure trove of the day, however: this miniature bottom trawl, a baby of the type much-despised by conservationists and clams, dragged along behind the boat for a few minutes (doing apparently little long-term damage to the often-disturbed sandy bottom) and when winched up, spilled a glittering, gleaming, hopping mass of undersea jewels. 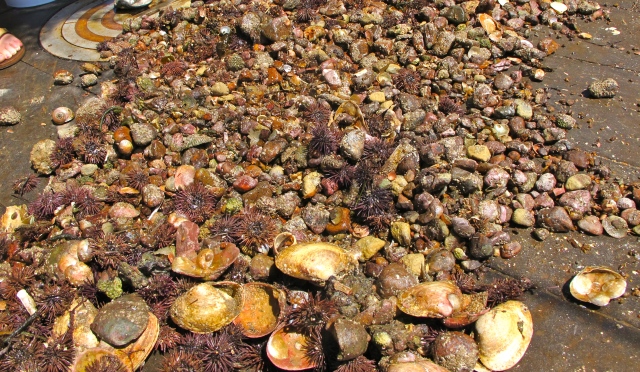 Clams and clam shells, alive and dead, poured out of the net along with purple urchins, snails, smooth rocks, scallops, algae, and hundreds of knuckle-length pointy-faced shrimp. Some of the rarer organisms were pulled out for more careful stowage (meant for later scientific research) or more careful observation- a slightly battered pipefish, a few massive whelks, some compact and irritated hermit crabs, and a massive long-limbed crab that perched on our youngest crewmember as he searched the pile of treasures. 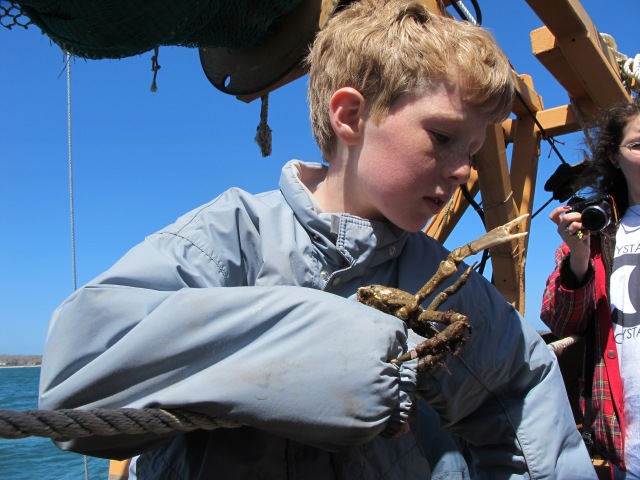 After a good morning’s trawling, we went indoors to check out the labs and holding tanks for all the scientific organisms. My favorite parts were the squid tank (squids are very hard to photograph…), the baby skates, and this GIANT HORSESHOE CRAB. It had never occurred to me that they could grow to be this size, or anything even close. 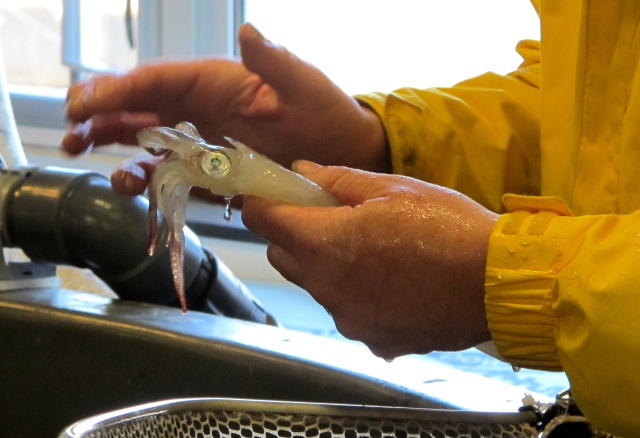 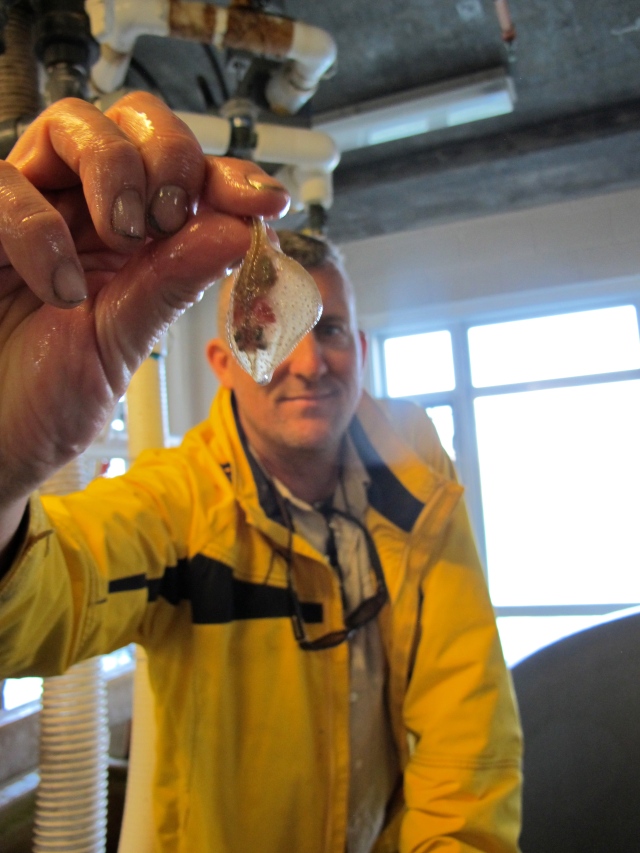 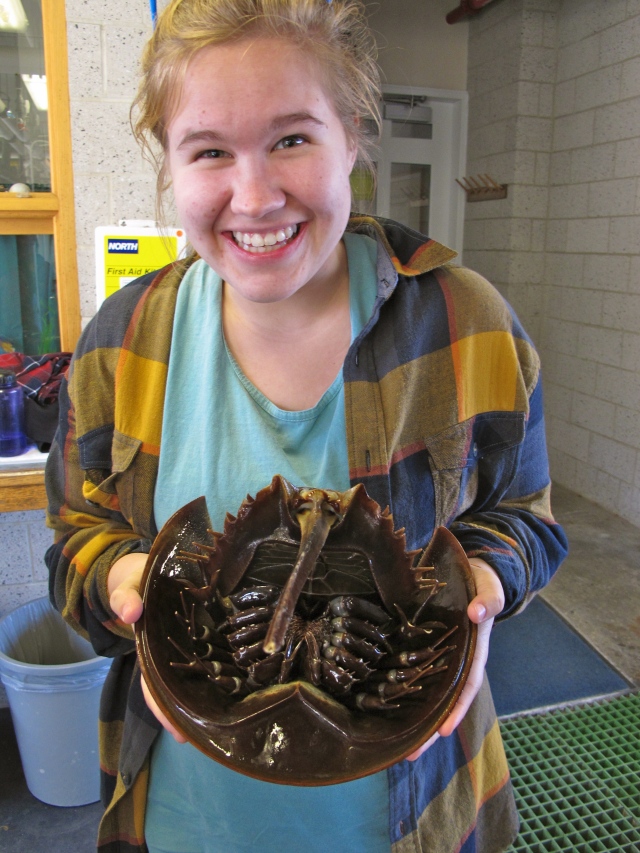 Fun class, great field trip! Everyone at least once should get tickles from a giant horseshoe crab.