“Baby monkey, but the PUMA! Oh my god!” yelled the sweaty man. He looked at us, three college girls hiking along the trail with a satchel of insects in plastic baggies and socks tucked into our field pants, and ran back the way he had come, over the fallen logs and around the trees and thick vines.

What would you do if a crazy man ran out of the jungle and screamed something like that at you?

We followed him off the path, of course, leaving our packs at the forest’s edge and picking our way inwards. Our crazy man wasn’t alone, as we soon found- a guide was waiting with him under a big tree, and with one mystery solved we started wondering what exactly they were both so excited about: the guide told us breathlessly of the mother howler monkey they had spotted giving birth in the canopy above. We’d heard the troop start making noise, actually, and wondered what had set them off- it seems they might have been at first welcoming their newest member before tragedy struck. The mother, after cuddling her baby for the first time, tried to remove the umbilical cord… and dropped the not-five-minute-old infant twenty meters to the jungle floor.

Of course the mother, like any animal (humans included) deeply invested in her offspring, nearly flew down the tree to retrieve her baby, but this was Corcovado, the most biologically intense place on earth. It wasn’t going to be that easy. On her way down the tree the mother monkey was met by a leaping mountain lion (Puma concolor). I can only imagine the wave of muscles and damp fur that rose to meet the already-terrified monkey, but still I can’t blame her for taking the edge of the blow on her shoulder and then retreating to the top of the tree, where she sat screaming by the time we arrived at this bizarre scene.

After the guide and tourist had explained most of this to us, I looked around. We had been at rapt attention hearing about this explosion of energy in what had been a fairly peaceful afternoon (for this jungle, anyways). Now, every shrub could be hiding a cougar; every tree, every vine might be breaking up the outlines of a predator and it hit me that we, too, were potential food in an unfriendly wilderness. The shrieking of the howler troop above did nothing to lighten the atmosphere. But the next words out of the guide’s mouth changed the scene considerably.

“The baby is still here.”

The mountain lion, for all its patience and predatory skill in pursuing the mother monkey, seemed to have been unaware of the newborn, and now that five humans were on the scene it seemed unlikely that it would return to play an active role in finding the baby. The mother, traumatized by her recent near-death experience, was also unlikely to return to the ground anytime soon… which left us, straining our eyes and ears to determine if anything was left of the life that had so recently and so dramatically been introduced to the cycles of jungle existence.

We found the baby under leaves, clinging with closed eyes to a twig and making tiny, unhappy noises. 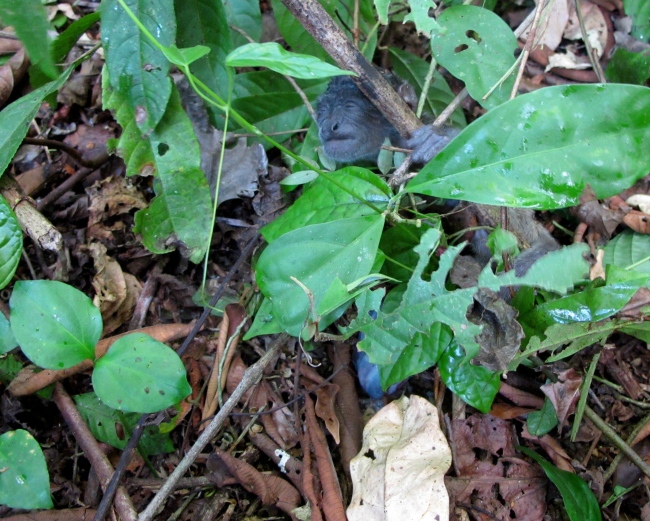 You can see the afterbirth in this photo- it’s the blueish-white lump under a leaf directly below the little monkey’s face. And it was still attached. Much to the distress of the baby monkey.

“Do you have a pocket knife?” the guide asked me. Of course I did, but I didn’t expect his next statement. “You have to cut the umbilical cord.”

I’m an ecologist, a student of natural systems and interspecific interactions, an observer of the world and a fairly educated human being. But in this situation, I had no idea what to do. The arguments against intervening at all were very strong- I’d be interfering with a natural system, I could hurt the baby, or I could myself get some sort of disease from contact. But on the other hand, it was impossible to tell how much our presence had already affected the events of that patch of forest that day, like the actions of the mountain lion or the hesitance of the mother to return to the ground for her infant. And tangled in what had once been its life support system, the baby could hardly move or breathe. So in a haze of bewilderment, I tied my hair back, got out my pocket knife, and picked up the baby in the leaves that had fallen on it.

Her. She was a baby girl, sticky and warm and strong-fingered, wrapping her tail tight around my forearm. I pinched and snipped her cord, dropping the afterbirth to the ground and trying to keep my skin away from her tiny body, but her arms scrabbled for me and she wanted, so clearly, with her tiny now-opened eyes and elf ears and wrinkled face all straining forward, to be close to another being.

I could feel her ribcage, her heartbeat, her breath in my hand, and her little cries broke my heart as I’m sure they were breaking the heart of her mother high in the trees. 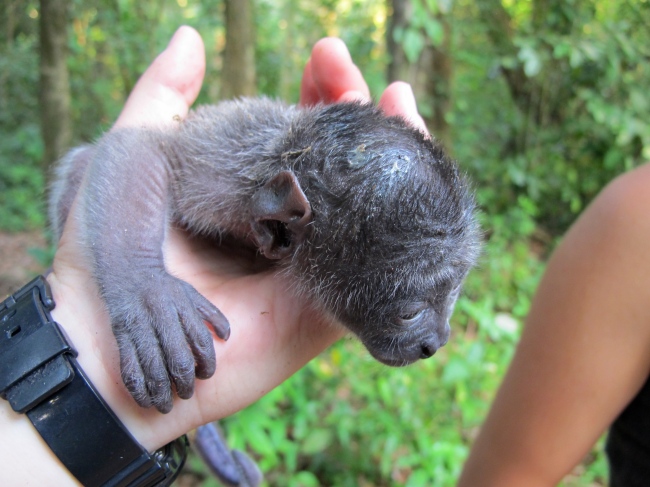 We left her near where we found her, tucked between a tree’s buttresses. Her family watched from above and I prayed to anyone listening- pumas, monkeys, tourists, or gods- to let her rejoin her clan in the canopy. I had no business interfering any further in the life of the rainforest, but as we walked away from the tiny baby I had just peeled off of my arm, all I wanted was to make sure she got every chance to make it to her next birthday.

Life goes on. I’ll never know what happened to her after we left, and I can’t make myself believe that she made it or that she didn’t. Life goes on.