Puddles is what we have decided to name our new friend. He’s not as dear to me as Nacho (see one of my posts from Monteverde for the story of Nacho the Science Dog) and he was not as lingering a companion, but Puddles is very beautiful nonetheless. 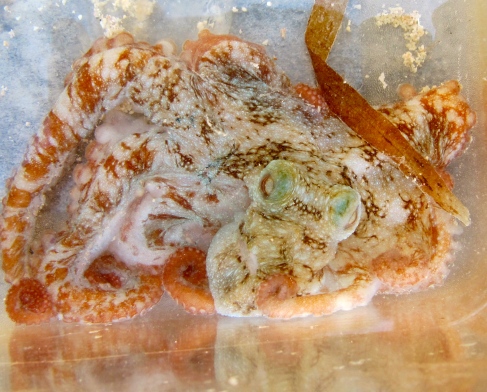 See why we call him Puddles? Tyler found him under a giant lump of dead coral, and we coaxed him into one of our sampling buckets to get a better look at him. He was obviously unhappy, so we didn’t hold on to him for too long- just long enough to watch him change from bright turquoise to green and red and back again.

Puddles might have been the reason we didn’t find any mantis shrimp in that section of the beach, though- octopuses are listed as major predators of the formidable mantis shrimp. Seems like “squishy” would not be the best strategy for tackling the smashers and spearers of the stomatopod world, but cephalopods are supposed to be very smart, so maybe there are some secret plans and clever tricks involved…

I still doubted, however, that this little lady could take on our mantis shrimp: 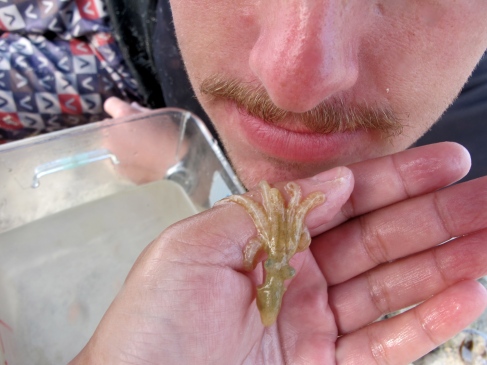 She was just so weensy, and so floppy that it wasn’t, in fact, difficult to imagine that Tyler had just sneezed her right out. Hence her nickname, Booger.

When they’re that young, it’s hard to ID them to species, but she (it, he, I don’t really know…) is likely the same type of Caribbean Reef Octopus as Puddles. Which is good, because that species is not known to be venomous, and this little Booger bit Tyler quite hard with her teeny little beak.

Booger actually managed to escape captivity all by herself, but not before I got this shot of her post-battle pose: 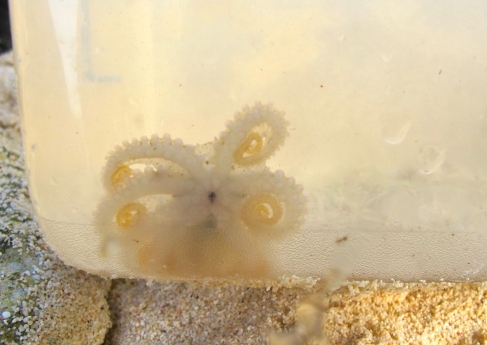 If I were a witch (I totally am not, please do not be suspicious in any way because IT’S NOT TRUE I SWEAR) my familiar would definitely be an octopus. The inconvenience of carrying around a bucket of seawater would be far outweighed by the awesomeness of their square pupils, the wiggliness and versatility of their soft bodies and extendo-sucker-arms, and the constant reminder of the Beatles’ song “Octopus’ Garden,” which I have loved since I was small. Plus according to Zak, one of our TAs, they’re GREAT conversationalists.

3 comments on “Puddles and Lil’ Booger”