In part because of this little guy: 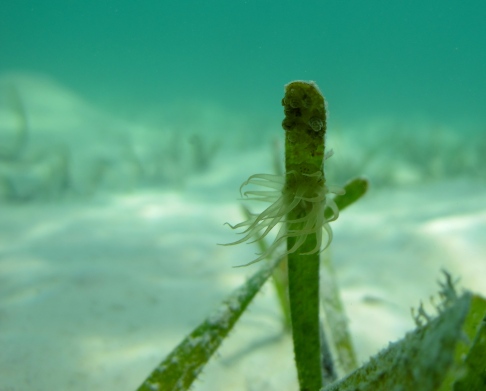 It’s a turtle grass anemone, growing on (you guessed it) turtle grass, in the big lagoon where we were surveying conch and algae populations. Any attempt to walk through the turtle grass with any exposed leg skin resulted in many unknown (and very painful) sting marks and even blisters… the less painful stings were usually from hydroids also growing as epiphytes on the seaweed. Meanwhile, if we weren’t walking through the grass towing all our gear, we were swimming, clearing masks, clearing ears, diving for conches, taking notes, swallowing water, losing fins, and floundering away from alarmingly large tarpons and barracudas.

People did not evolve in the oceans. It’s a foreign environment for so many reasons, but a compelling and attractive one for many of the same; so much is left to be explored, and so much is left that is still new to individuals and to humanity in general. There aren’t any answers for so many of the questions I have about underwater systems yet. And there’s so much neat stuff to see!

During our marathon 5-hour lagoon research session (don’t worry, we drank lots of non-salty water afterwards to make up for any losses sustained in the morning), we ran into a number of exciting creatures, among them the aforementioned tarpon and barracuda. Similar-sized fishes (aka HUGE), the tarpon and barracuda are both solitary predators that were cruising the lagoon presumably in search of some mid-sized fishes to chomp on. While startling, these guys didn’t present as much of a threat to us as the spiny sea urchins and stinging anemones in the grass.

Almost as surprising as the appearance of a six-foot-long fish in a five-foot-deep lagoon was the banded coral shrimp, a cleaner of larger fishes (like Jaques from Finding Nemo, anyone?). It had set up its cleaning station on a small bit of rock surrounded by sand and turtle grass, and was working on a two-year-old Nassau grouper when we swam by and scared off its client. They’re so cute! This one came out to play with me: 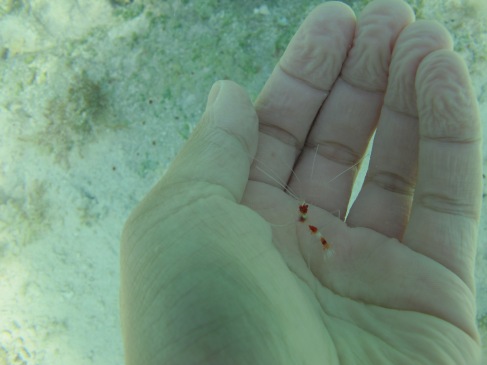 Worth it? I think so. I’m exhausted, many in our group are sunburnt or dehydrated or both, and we’ve all felt the stings of the anemones and hydroids along with the more mental sting of knowing that we’re ill-suited for our study environment especially in comparison to the sleek predators sharing space with us… but the adventure, as always, continues.