Okay, that title might have been a bit too much, but science puns are fun! Science! Yay?

Anyways, the point is that I went on a night snorkel last night and it was AWESOME. Little tiny blinky lights in the seagrass, the moon full and high above the water, the reef dark and looming ahead of us… We (three of us, me, Molly, and Ellen) swam out into the darkness with our little dive torches, ready to explore the now-familiar reef in front of the LCRC in a completely unfamiliar light (or lack thereof, as it were).

It’s a different place after dark. Coral polyps compete with anemones (invisible or hidden during the day) for the title of “wiggliest sessile animal in these parts here’bouts” and giant spiny lobsters assure one another that the reef is certainly not big enough for all of them. Meanwhile, Billy the Squid is sneaking up from behind with glowing spots and tentacles drawn: 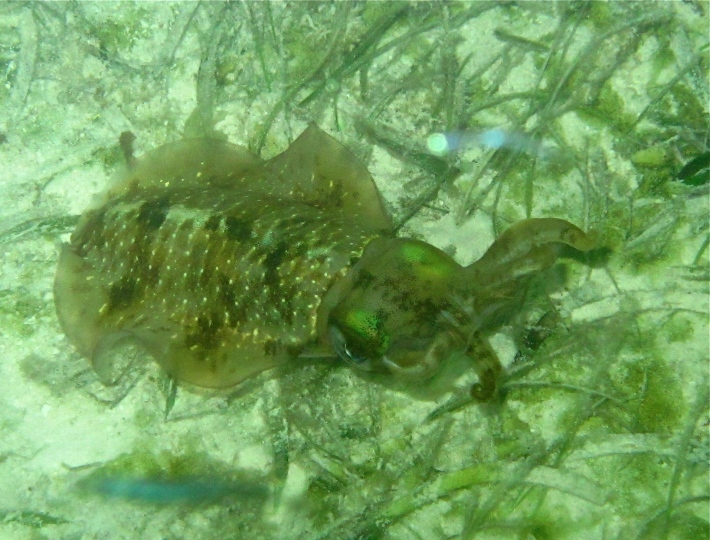 As the parrotfishes all slept in their warm mucus blankies, the predators were on the prowl, thieving and snatching and generally causing very quiet but very effective mayhem on anything unlucky enough to get caught out after the curfew set by the sun. This octopus is bank robber #1 out on this reef, reaching tentacles into reef hidey-holes and swapping disguises to blend in with the background and escape notice from the good townsfolk of the reef. 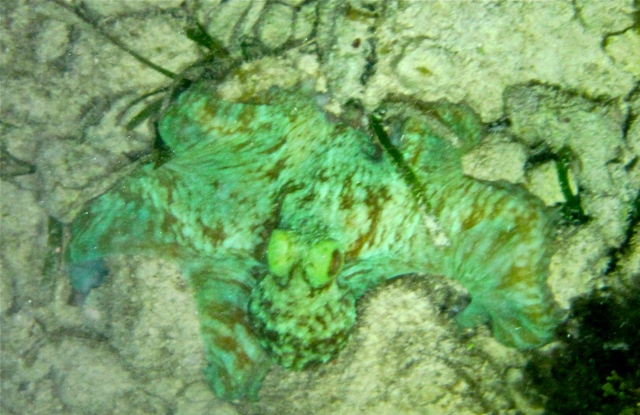 The water is dark and the visibility is limited- but the rewards are great for those who dare to venture forth to the frontier of night. Invertebrates galore, bioluminescence, and all kinds of stealthy hunters and skittish prey… never a dull time out in the wild, wild wet.

One comment on “Squidnappers and Octopossies: the Wild Wild Wet”