Jimena, Sammi, and I are working on a project in which we’re sampling stream invertebrates at various elevations along a tropical mountain stream, which sounded fairly simple at the time of inception- go find the stream, walk up and sample, walk down and sample, sort out the bugs, analyze data, and done, right? But then it got fun- we couldn’t walk far down the stream from our top point, and when we found it again it was down a very steep ravine. Eventually, we found a road that crossed and asked the… interesting gentleman… who lived in the adjacent house-type object if we could use his backyard for Science. He was very enthusiastic and probably a little bit altered in state of mind, and was thereafter referred to by our group as “shirtless booty-shorts guy.”

After sampling the stream in his back yard, the epic journey continued down the mountain slope. We talked to probably twenty different townspeople (using my rudimentary and Jimena’s more real Spanish), and encountered what we termed the “Tiny Dog Gang” (which is definitely what I’m going to call my next bank-robbing venture). 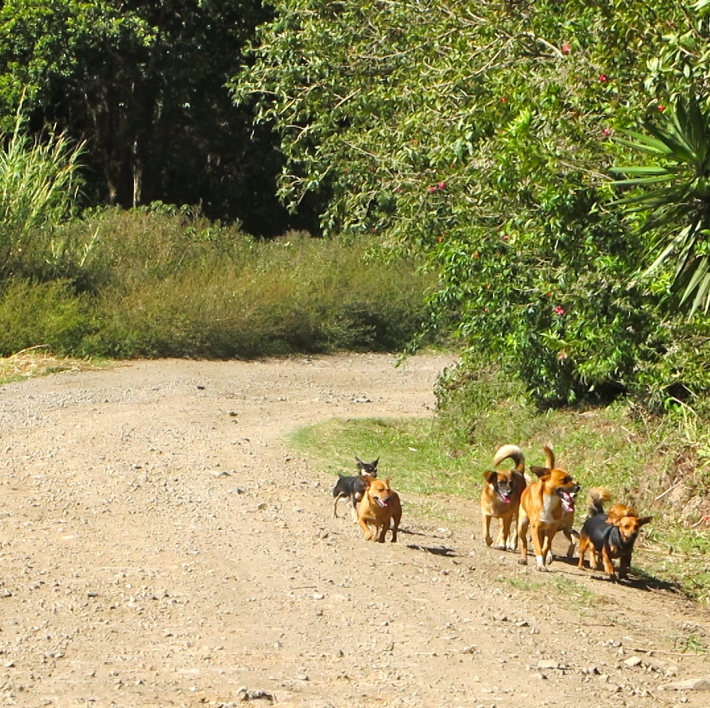 We bravely continued onwards and downwards until we reached the Monteverde Butterfly Garden, where our Spanish was greeted with blank looks and an “excuse me?” They actually did give us directions to a super-secret path down to the stream, which we found after a bit of extra walking. Our other extremely valuable acquisition from the garden we named Nacho- he ran up to us as we arrived and then followed us out as we were leaving. I know it’s bad to pat stray dogs, but his enthusiasm and his big brown eyes reminded me too much of Murphy, one of my dogs at home, and I just couldn’t help myself. 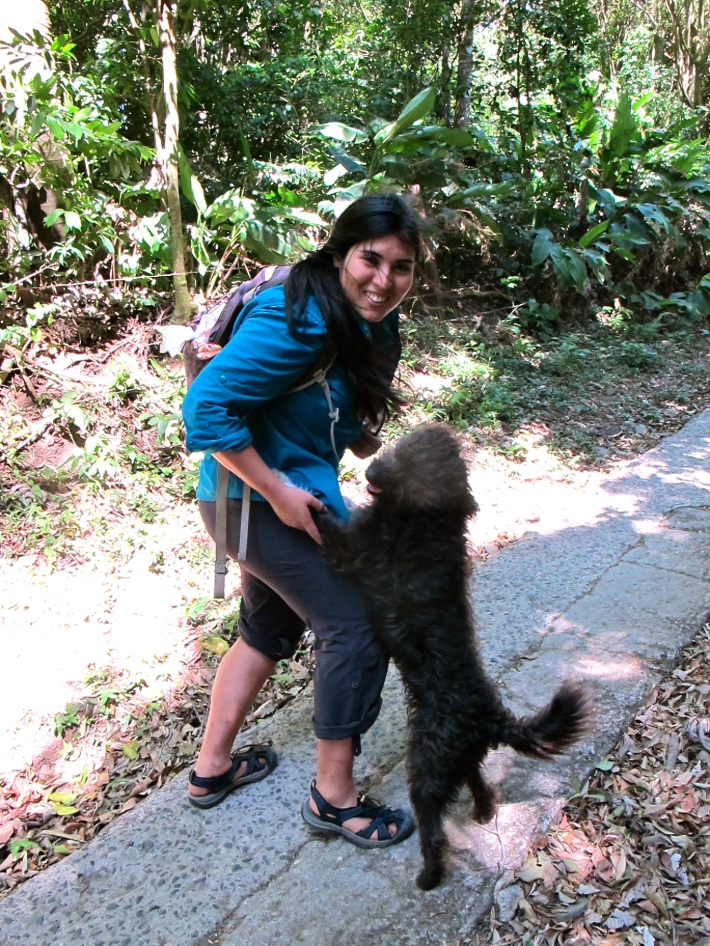 Nacho followed us for four hours, scrambling down rocks, splashing through the stream (downstream of our study sites, luckily), scaling ravine walls, inspecting unexpected river crabs, and sharing my lunch. He cheered us on when we thought we were lost, and definitely became one of the crew. Our most noble pathfinder, our scarer-of-birds, our little sleepyhead in the later afternoon, and our constant companion, Nacho just made the sampling process a happier time. 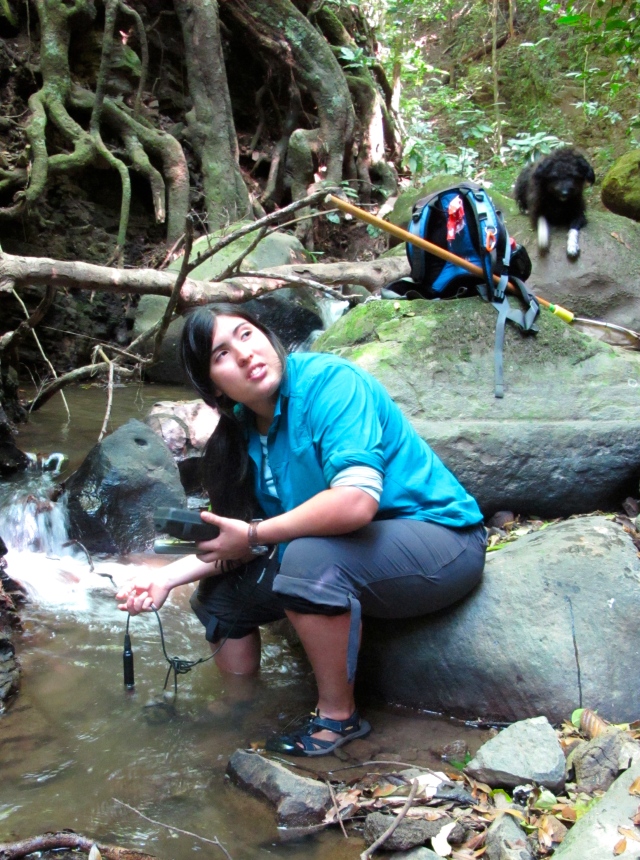 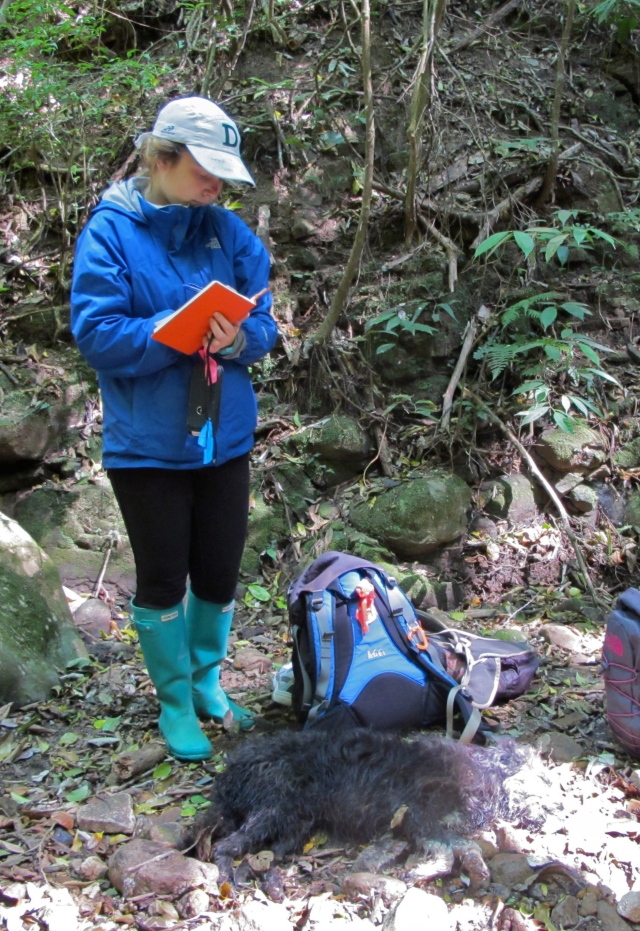 After our last sampling site (possibly in private property, definitely not road-accessible, potentially the best spot in Monteverde for spotting Blue Morpho butterflies), we headed back up through town, stopping at a grocery store to pick up necessities (loofahs, chocolate, nuts, sunscreen…) and catching a cab for the last long hill. Nacho went home when we headed for the grocery store, and I miss him already, but today was definitely a good one for the story-telling later on.

Just remember, kids, adventure is out there! 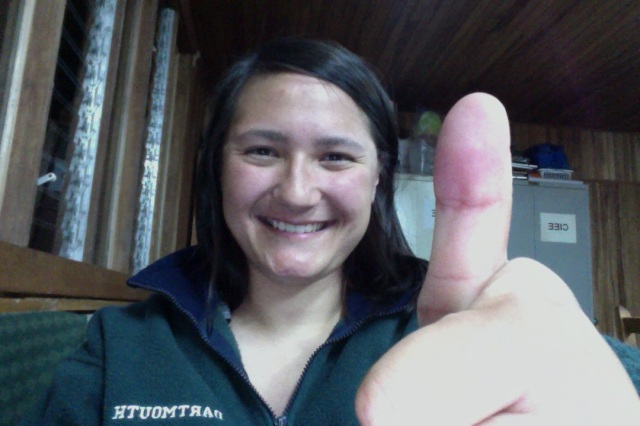 4 comments on “Adventuretimes by Day, Writingtimes by Night”