Today we began our first student-initiated project of the trip, developing our own experiment and collecting data to test a hypothesis.

As might be expected, it was at first a total disaster. None of our methods were effective, none of our ideas were clear enough to explain easily enough, it seemed like we would never have enough time to get anything done but at the same time had an endless day of frustration ahead of us… and then suddenly it got better. We waded out into the marsh with little more than a net, a sharpie, and some plastic bags, and got down to doing science.

Maybe more tomorrow about the actual experiment, but for today here are some pictures of what we saw and how we went beast-mode out on that swamp:

For a while we were up on the cracked mud- the wetland dries up every dry season (it’s dry season now, who knew? It’s supposed to snow in Hanover the rest of the week…) surveying appropriate patches of invasive vegetation for sampling. Pretty much the whole marsh is in a state of constant invasion, and it’s hard to tell exactly what is native vegetation at this point.

We soon got up over our knees in the wetter part of the marsh… boots full of snails, plants, and water were the result, and nobody really wanted to mention that under those conditions it would be very difficult to get away from the 10-foot crocodile we saw on the first day out near where we were wading… But the resultant boot-waterfalls were a great photo-op. 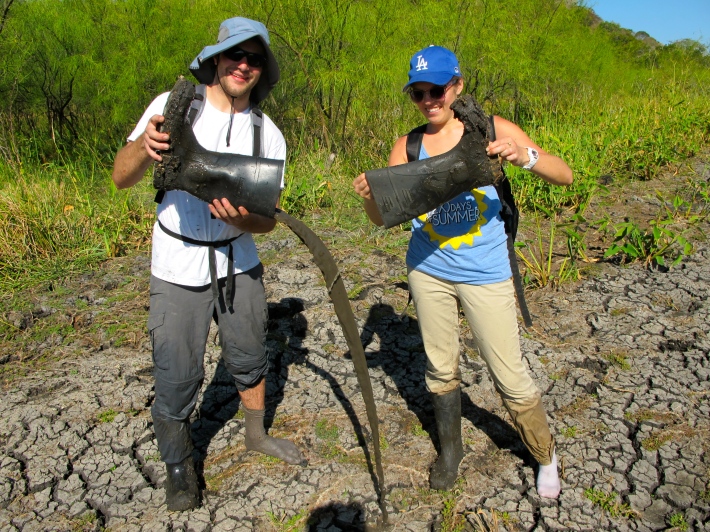 Tommy asked for a photo of the watchtower:

Doesn’t look like much, but I promise it’s ricketier than it looks and more interesting than it seems.